This is my final year living in China, and how I will miss it so. I know for many people, especially those of you who have never peeked behind its red curtain, you will never appreciate what a delightful place it is to live.  For the last 4 years, my motto has become, “you can’t make this sh$%t up” because this place is so full of surprises. So, I’m dedicating a series of blog posts in an effort to commemorate this special time in my life and summon some love for China–because, quite frankly, there’s a lot to love about this crazy place.

We are still in the midst of holiday season here, as the Chinese New Year is fast approaching and commences around the  27th of  January, depending on the moon. There’s a lot to this holiday, so today I only plan to focus on the Chinese Zodiac, which is based upon lunar cycles and has some fascinating elements behind it.

First of all, in the creation story,  Buddha (or God) wanted to make a calendar before departing from Earth. He summoned all the animals to a race, and the first 12 animals to cross the finish line were the ones who were awarded the privilege of the zodiac for this calendar. So, you could say that no matter which Chinese Zodiac sign you are, you are a winner! hahaha 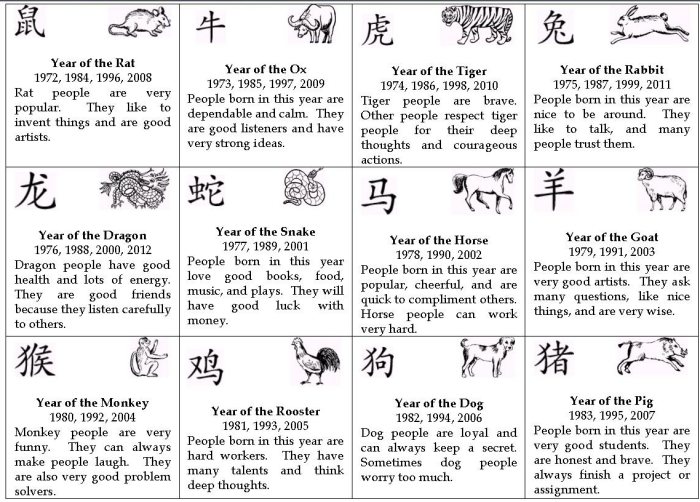 2017 is the Year of the Rooster, which is most unlucky for you if you are one. Yep–your Zodiac Year is 365 days of confusion and misfortune–or so the belief is. Don’t distress, however, because wearing red (especially something given to you from an elder) helps to ward off ill fate and create harmony in your zodiac year. But for all of us other signs, it means a year of hard work is ahead. No sitting on your loins and procrastinating. Get busy! If you put in the effort, then this is supposed to be a good year to increase your wealth and health. So, if you have been slipping on your New Year’s Resolution, then it’s time to get back on track because the rewards will be plenty for those who are diligent.

Speaking of Chinese New Year–no, it is not the custom to make New Year’s Resolutions during this time; however, it is a time to pay off debts, clean the house and look spiffy with a new hairdo.

So there you have it, that’s a brief rendering of this wonderful element of Chinese culture.